Rivers are inherently interesting. They mold landscapes, create fertile deltas, provide trade routes, a source for food and water; a place to wash and play; civilizations emerged next to rivers in China, India, Europe, Africa and the Middle East.

They sustain life and bring death and destruction. They are ferocious at times; gentle at times. They are placid and mean. They trigger conflict and delineate boundaries. Rivers are the stuff of metaphor and fable, painting and poetry. Rivers unite and divide—a thread that runs from source to exhausted release. —      (Edward Gargan, The River's Tale)

From outer space, the earth looks like it is covered with veins and arteries, similar to our bodies. 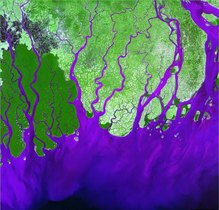 Singapore's Rivers
The earth's arteries, however, are really a vast web of rivers and streams that channel water across the planet, from mountains to oceans. Although there are many rivers and streams, these sources of running water account for a very small portion of the earth's total surface, just .3%.