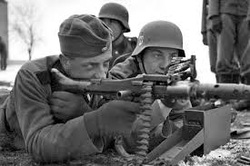 It was the bloodiest, deadliest war the world had ever seen. More than 38 million people died, many of them innocent civilians. It also was the most destructive war in history. Fighting raged in many parts of the world. More than 50 nations took part in the war, which changed the world forever.

For the British and Americans, World War II had a clear-cut purpose. People knew why they were fighting: to defeat tyranny. Most of Europe had been conquered by Nazi Germany, which was under the iron grip of dictator Adolf Hitler. The war in Europe began with Germany's invasion of Poland in 1939. Wherever the Nazis went, they waged a campaign of terror, mainly against Jews, but also against other minorities.

Germany and its allies had been the losers in World War I. Germany was stripped of one sixth of its territory and forced to pay huge reparations (payments by a defeated country for the destruction it caused in a war). After World War I, Germany suffered from high unemployment and runaway inflation. German money became almost worthless. Many Germans seethed in anger at the peace treaty.

A League of Nations was set up after World War I to keep the peace. But the U.S. did not join, and other countries were too busy with their own problems to worry about Germany and other trouble spots.

Then, in the early 1930s, the world was hit by an economic depression. Workers lost their jobs, trade fell off, and times were hard. People looked for leaders who could bring about change.

Rise of Dictatorships  Germany, Italy, and Japan all came under the rule of dictators or military leaders. A dictator named Mussolini took power in Italy in 1922. Military leaders took control of Japan in the early 1930s. In Germany, Adolf Hitler, leader of the Nazi Party, gained power in 1933. These leaders promised to restore their countries to greatness. But they set up totalitarian governments. (A totalitarian government is controlled by a single political party that allows no opposition and tightly controls people's lives.)

Hitler began to arm Germany for war. Japan invaded China. Mussolini sent Italian troops to conquer Ethiopia, in Africa. None of the world's democracies did anything to stop them.

A World at War  Hitler had a plan to conquer Europe. He began by taking Austria, then Czechoslovakia. Again, no one tried to stop him. As Winston Churchill, who became Britain's wartime leader, said, "Britain and France had to choose between war and dishonor. They chose dishonor. They will have war."

Churchill's words came true. In 1939, German troops invaded Poland. World War II in Europe had begun. The U.S. did not enter the war until December 1941, but once it did, it took a leadership role. U.S. troops fought in North Africa, Europe, and the Pacific. At home, Americans rolled up their sleeves to outproduce the Axis powers (Germany, Italy, and Japan) in the weapons of warplanes, battleships, and guns. Everyone did their part.

A Changed World  Germany surrendered on May 7, 1945, ending the war in Europe. The war in the Pacific did not end until after the U.S. dropped two atomic bombs on Japan — the only time such bombs were ever used in war. Japan surrendered on August 14, 1945.

President Franklin D. Roosevelt, who had led the U.S. in wartime, did not live to see peace. But in a speech written but never delivered, he spoke of the need to preserve peace: "Today we are faced with the preeminent [above all other] fact that, if civilization is to survive, we must cultivate the science of human relationships — the ability of all peoples, of all kinds, to live together and work together in the same world, at peace."

Links to Learn From....poke around, read and learn!